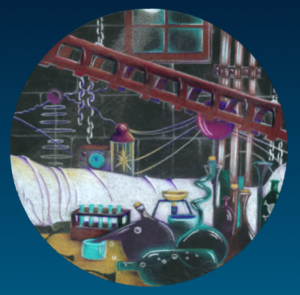 Seven years. Seven years since her father’s henchmen had held her down while he forced her hand into a signature on the marriage contract, and Lady Rosalind Dibkiss had never given her husband, Lord Rudolf, what he really wanted. Never.

So he usually paid for it elsewhere, but temporary financial embarrassment had called for a different approach, one which had propelled him up the spiral stone staircase to the room at the top of the West Wing Tower of Castle Stein, Rosa’s ancestral home and the place where she and Rudolf lived in a wedded bliss that depended on them seeing each other as little as possible.

The room – Rosa’s laboratory – was strictly off-limits to Rudolf, but if the ancient stone walls looked down on him with disapproval, he didn’t notice and wouldn’t have cared. Rudolf only noticed what mattered to him, and what had mattered to him from birth was himself. From greedy baby to moody child to petulant adolescent to grasping adult, he had whined, tantrummed, kicked and snatched his way through life, demanding much and taking all.

But then there was Rosa. If she caught him in her laboratory, his life could be entirely different – much shorter for a start. However, she was in the library getting a quarterly report from the Chief Alchemist, so Rudolf had a good couple of hours yet, but better not risk it. He locked the door.

On a scarred and stained wooden table lay open a small book so old it only held itself together out of force of habit. The serif-littered handwriting caused eye-strain, particularly where the black ink had bled into rainbows under the splash of chemicals. Holes in the ragged pages indicated the power of acids, and brown rings and grease marks showed that those pushing back the frontiers of knowledge still have to eat and drink. Alongside the book, various spoons and spatulas had been thrown onto the table; an assortment of phials, bottles, waxed paper sachets and round ceramic dishes had been assembled; a large glass beaker stood at the ready.

Rudolf rubbed his hands together.

He started filling the beaker.

‘Two drops of… this one; one, two – oh, never mind. Six ounces of… this; there, that must be about six ounces… bit more for luck. Half an inch of… that’ll be the blue one… then fill ye glass up to… there… with this.’

He held the beaker up to the light and shook it slightly; the ingredients jostled around each other momentarily before reasserting themselves into separate entities.

He put the beaker back down, wiped his sweaty palms on his britches and ploughed on.

‘One of… those… two tbsps of… this… is that tbsps or tsps? Too late now… stir ye mixture with a glass rod… oh, a teaspoon’ll do… and when it doth cease to bubble, it be fit for use.’

After impatiently whisking the concoction, he banged the teaspoon twice on the side of the beaker before throwing it back into the pile of assorted implements.

In the swirling mix, thousands of tiny bubbles laughed.

‘When it stops fizzing, it’s ready,’ he said sternly.

Energy that wanted to be out and about.

Out and about playing havoc and making noise.

Playing havoc and making noise on an epic scale.

There were two doors in the room, and no time to unlock one of them. Rudolf pushed open the other one, ran through and let the wind slam it after him. It was a doorway that was rarely used, given its close proximity to the sky and the fact that it only had floor on one side. A long scream echoed and fell away, as did Rudolf and – shortly after the explosion – variously sized fragments of laboratory and castle.

The witch opened the closet, instinctively catching the broomstick as it fell towards her. She put it to one side, as she did a wicker washing basket, a garden fork, spade, sieve and trowel, a small wooden stepladder and another wicker basket full of empty glass jars.

Finally, she reached into the closet and pulled out a folded pasting table which she carried into the garden. The noise of the cottage door opening and closing caused the head of a miniature lion to pop up from the tall grass to see what was happening.

‘Get changed,’ said the witch. ‘It’ll put folk off if they see a lion hanging about the place.’

The witch unfolded the table. ‘Folk coming for the sale.’

‘Today?!’ said the lion, suddenly blurring into a shimmering cloud which shrank rapidly until it formed a domestic cat, pure white from nose to tail and all points south.

The witch pushed the table legs into place. ‘Yes, today.’

‘But you— you only found out yesterday.’

She stood the table upright. ‘Nowt gets past you, does it?’

‘But what? I got the news; we’re having the sale. I’m not hanging about.’

‘Are you—’ he began, turning to look at the witch, but she had already gone.

He padded into the cottage. As he stuck his nose round the bedroom door, the witch said, ‘You’d best sort out what you’re taking. And not a lot, mind. We’re travelling light.’

He leapt onto the bed where she was sorting through a meagre pile of clothes next to a small carved wooden box, three well-used books and something that made his heart sink even further.

‘You have to use it if we’re going away.’

‘You haven’t said where we’re going.’

The witch took a haversack from the back of the bedroom door.

‘No, this is just where we’ve lived and worked – but not for much longer.’

‘Are you going to stop working?’ the cat asked.

The witch packed the books in the haversack.

‘What? Stop being a witch?’

‘Ah, now that’s a different thing altogether,’ she said, wrapping the carved wooden box in the clothes she had chosen. ‘A witch is what I am, and work is what I do.’ She put the bundle into the haversack. ‘I can’t stop being what I am.’

Want to read more? Then please click here to order Twicetime and get FREE UK postage! 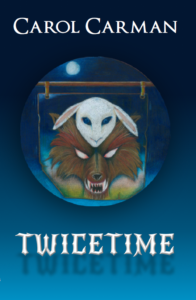